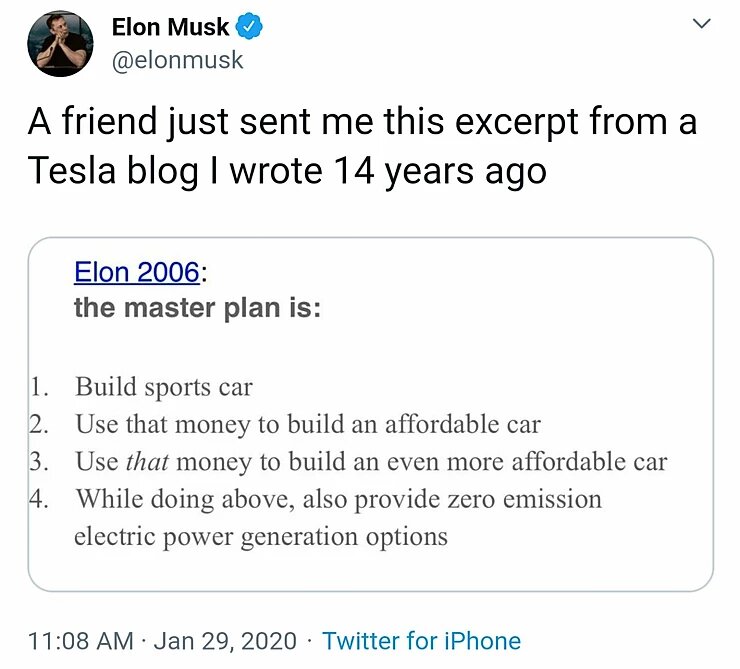 Up to 31 years living in Russia, engaged in politics and developing the brain.

Escape from the FSB to Ukraine, fight against corruption on a volunteer basis there.

Then, move to the USA and get political asylum there.

Read tons of information about Elon Musk and get inspired by his ideas.

Work in low-skilled jobs and switch a ton of sleeping places.

Get an occupation in the Aerospace Industry.

Go from there to Tesla Gigafactory 1.

Go back to the San Francisco Bay Area.

Start working on your own startup.

Buy a domain name and start a blog.

Gather a team of like-minded people.

Create together with them your first sketch of the prototype

Develop an electric vehicle project for camping and/or heavy-duty works.

Make a presentation to investors.

Not get any money.

Get upset and get drunk.

Sell all investment package and spend the last stock of cash on another attempt.

Not get money again.

Get drunk as a fiddler one more time.

Climb onto the roof.

Make selfies on the night city background and get off the roof.

Sit in the Wrangler and go to the Sierra Nevada mountains.

Turn on the laptop and rewrite the whole plan.

Go back and get rid of some "ballast" in the team.

All together, rewrite the whole plan again.

Go back to the investors.

Suddenly get the money.

Start looking for a place in Silicon Valley.

Once again get amazed by the prices of San-Francisco Bay Area.

Find an old barn in the ghetto.

Start looking for an old chassis to convert to electric.

Buy a dump truck or an RV.

Burn half of the equipment.

Curse that dumb idea and a day you got it.

Get stuck on one damn issue.

Rewrite the whole thing and redesign the project radically.

Explain to investors why we still don't have money.

Come to the second round of investment and show "it" to investors.

Wipe yourself after the bucket of shit, which the "Elite of Dotcoms", who climbed up by useless websites in the 2000s, poured on you.

Find one, the same abnormal as we are, who will believe in us, and hiding from the others, will catch us in the corridor and make an offer.

Rent a good ones bodyshop and office.

Again rewrite, the hell, everything

Start from scratch and drawings the Real Project that shall blow up the market.

Hide it from investors, explaining to them why we are marking time and where is the money.

Fire a ⅓ of the ballast, who never believed in our success.

Get a couple of really valuable "diamonds" who found us on their own.

Show it to investors and the public.

Get hundreds of offers and a long queue of investors.

Celebrate, drink, squander, and show off.

Get a warning from investors that we're already the company, not a startup, and should stop it.

Pull ourselves together and start working.

Hire people with you always found as 'useless humanitarian'.

Buy an abandoned factory or plant.

Suddenly discover, that to build a new one is cheaper, than start that one.

Unhurriedly start production by the hands of lazy and idiots.

Plunge into the Production Hell.

Solve all crises by firing a third of the useless ballast again.

Start a stable supply of our equipment to all kinds of polar explorers.

Carry out an expedition with our all-terrain vehicle to the Sahara, Arctic or Antarctic.

Get an explosive growth of stock price and the offer from the Ministry of Defense.

Secretly rejoices in a secret contract.

Start a new Project-2 for the needs of the military, with a built-in blaster and adamantine armor.

Survive in the most extreme conditions, protecting the crew from hot lava, penetrating radiation, and the Mongolian cavalry.

Become the best-selling RV brand in the United States.

Get nominations for the most reliable "Workhorse" for timber, mining, construction and oil industries.

Become the main multi-platform transport and combat vehicle in the U.S. Armed Forces.

Open factories all over the World.

Get a trillion-dollar capitalization and enter the Top-10 companies on the planet.

Discover which piece of scrap the first Martian colonists use after they arriving on the red planet by the Starship.

Recognized that "It's the Time!" and start the Main Project of Our Life — a Martian All-Terrain Vehicle.

Choose from the best engineers on the Earth, who you want to hire.

Build "something like a Mars vehicle" and send a couple of prototypes to Mars.

Finish tests in the harshest conditions on the planet.

Recruit the team colonists, who came back from Mars, listening to their comments and suggestions.

Get contracts from a couple of mining colonies and the United Earth Government.

Start a regular supply of our various special equipment to the Red Planet.

Constantly fly there on business trips, checking how everything works.

Release a second edition of the Mars All-Terrain Vehicle, completely redesigned and upgraded.

Equip on that truck an expedition to Volcano Olympus.

Make a live stream to the Colony and Earth, telling them about stages of the journey.

Achieve the highest point in the solar system.

Send a pathos video message to all colonists and earthlings.

Wearing your spacesuits, sit on the edge of the crater together with those who were able to reach this list row.

Remember everyone with whom we started in the early 2020s on Earth.

Tell funny nostalgic stories about the company's past.

Wait until you see a blue sunset over red dunes, and back to the truck.

Open a bottle and lit cigars.

Tell the onboard AI to shut herself mouth and the fire alarm.

Get drunk as lords.

Turn off the Artificial Intelligence on board.

Drive on a high speed down the hill, singing Highway to Hell and maneuvering between boulders.

On one of the sharp turns, flip over and fly away into the fissure.

Wake up from the alarm and see the red emergency lights.

Detect an oxygen leak, a fast decrease of the temperature, and a broken spine.

Look at each other.

Start a pathos song and sing together until there's not enough air for that.